Big Trouble In Little Ass by Wol-vriey now an eBook! 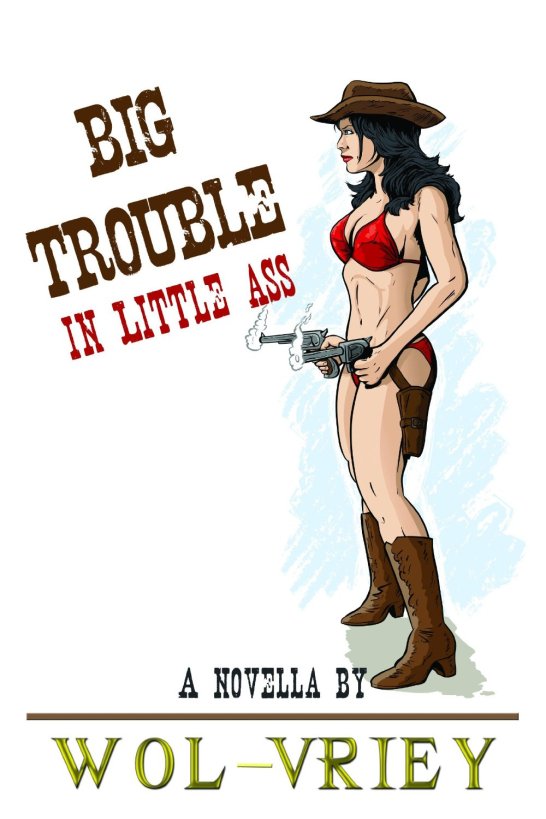 In the town named Little Ass, tight-assed prostitute Rosa overhears a gunslinger’s plans to assassinate rancher Edison Bennett. Once the badass Bennett learns of the plot, he ensures there’ll be hell to pay for any attempt on his life!

Yes, it’s going to take all of gunslinger Jude’s shooting prowess, his eclectic collection of strange firearms, a trusty horse that requires an owners’ manual, and the help of the lovely and invigorating Nell (who’s EXTREMELY odd when the going gets weird), to survive the Bizarro hell that Edison Bennett unleashes in order to hold onto the land that he’d stolen from Madam Zizi.

An excerpt from the book:

Edison returned with his drink. He and Valhalla studied Jude’s gun.
“It’s made of bone, Edison,” Valhalla said. “Smells like fish bone.”
Edison raised a startled eyebrow. He finished his whiskey, then broke the weapon open to check its ammo.
There were three shells in the cylinder, and no spent casings. Edison thought the three empty chambers odd. Even odder, the ends of the unfired shells looked like frayed meat.
He shook the bullets out into his hand.
Frowning, he held one up so Valhalla and Ike could see it. Lamplight glinted off the bullet’s fingernail. “What sort of a weapon fires severed human fingers?” he asked.

Download your copy today for only $0.99 or for FREE via a Prime membership on the Amazon.com Kindle Lending Library!