MAGIC CAN BE MURDER!!!

Drag queen Lucy Tang is back in Boston, and is hell-bent on settling her vendetta against casino owner Sookie Ling. And suddenly, Bud Malone, PI, has the case of his life to resolve.

When Boston’s robot police force are baffled by a mind transfer case, they come to Malone for help.

The one person who can likely help Malone out here is the witch Soledad Bathory. But Soledad seems to know a lot more than she’s telling him.

Oh, and Rick Rogers owes Sookie Ling a whole lot of money, a gambling debt that’s going to be literally Hell to pay!

Boston Corpse–Not your average detective novel!
Get it today at amazon!

This isn’t well-behaved young adult fiction. It is not intended for children, either. This is a graphically violent, EXTREMELY sexually graphic/depraved, quite sick book (in places) . . . seriously, not for the innocent. SERIOUSLY. Er . . . you’ve been warned.

This is Book #2 in the Bud Malone Series. Book #1 is Boston Posh.

From the man who brought you VEGAN ZOMBIE APOCALYPSE and BOSTON POSH, comes…

The biggest bank heist in US history. And Tom Palmer can’t remember pulling it off. And no, this isn’t your standard case of amnesia.

After a one-night-stand gone horribly wrong, Boston salesman Tom Palmer wakes up with a vagina implanted in his left hand.

Then his day gets worse:

Tom is transported across space-time to a nightmare version of Boston, one where the Bizarro virus has transformed half the population into cannibals.

Worst of all, Tom discovers that in this new Boston, he’s the infamous gangster Pussypalm, wanted for robbing the Federal Reserve Bank of Boston a year ago.

He also learns that the vagina in his hand is prophetic, i.e. it talks . . . after sex.

With 130 people left dead during his bank heist and six billion dollars missing, Tom knows he’s living on borrowed time. It is in his best interests not to remember anything.

But then everything gets so much odder. Tom begins remembering what has to be someone else’s life. Or is it?

Buy it NOW on amazon.com if you dare!

Download your copy of BOSTON POSH today for only $2.99!

Wol-vriey’s breakthrough Bizarro novel Boston Posh is getting some great reviews over on Goodreads and amazon.

Here’s what people are saying:

Not only will “Boston Posh” serve as a perfect introduction of Bizarro fiction to genre virgins, but will also satisfy the most babble-scarred of bizarro brigadiers.
– RICH BOTTLES JR., Author, THE MANACLED

… a surrealist’s nightmare with so many freaky elements it leaves the reader breathless.
– LEILA ANANI, Goodreads

A bizarro epic. You have been warned…Nothing can prepare you for the world Wol-vriey has created.
– Pedro Proença, Amazon

Right now, you can download the Kindle edition for only $2.99!

We are pleased to announce two new book trailers for Wol-vriey’s latest novel Boston Posh are now ready for your viewing enjoyment. Note that background music used on both trailers was composed by Wol-vriey himself!

Be sure to buy the book today at amazon.com, or if you’re feeling lucky, enter to win a free copy on Goodreads! 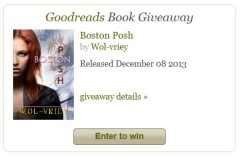 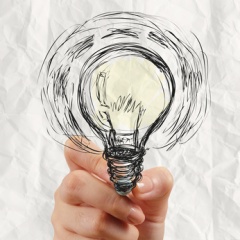 With the changing of the time and the falling of the leaves, I realize it has been a while since I published a piece to keep everyone in the loop with the happenings at ‘The Bulb’.

For those of you who weren’t aware, I launched a BRAND NEW version of my official personal website (http://www.garyleevincent.com) on October 15th and using this new platform, folks can enjoy content on both traditional browsers and mobile devices alike.

Also, we have four major projects currently in the hopper and I am very excited to tell you about them…

First off, we have a new story coming out from one of my favorite authors of all time – Wol-vriey.  Cleverly titled Boston Posh, we will go into the bizarro underworld of a post apocalyptic Boston, where Detective Bud Malone must uncover a mystery of a missing heiress.  You may recall Wol-vriey from one of his other titles – Vegan Zombie Apocalypse  – which was published by Burning Bulb back in the Spring.  He is also the author of Meat Suitcase and contributor to The Big Book of Bizarro and Westward Hoes.

Boston Posh is an incredible read and one of the few books that I read and re-read about three time in a row.  When this one comes out, you definitely want to check it out.  It is a total mind trip done up in a way that only Wol-vriey can do.

For a closer look, be sure to check out our Boston Posh teaser, by clicking here.

Most people familiar with the Darkened series believe everything to be nicely wrapped up and delivered with a bow on top at the end of Book III (Darkened Waters), hence giving a conclusion to The Darkened Trilogy. But that is not quite the case.

Darkened Souls represents a reimagineering of the gothic vampire saga with new characters and settings. Picking up where Book III left off, the fourth book in the series will kick off what I affectionatly call The Mother of Darkness trilogy and I hope to take this new story arc to new heights (or lows depending on you point of view).

Be sure to keep up-to-date with the latest developments in the DARKENED series by visiting www.DarkenedHills.com.

For fans of the Burning Bulb Bizarro anthology, Westward Hoes (and graphic arts in general), I am very pleased to say that work is progressing nicely in our Tailsman comic book.  For those who don’t know, I have teamed up with Bizarro horror author Rich Bottles Jr. and a famous comic illustrator to launch our first ever comic book from Burning Bulb Publishing.

Presently, we have the first five panels done and are shooting for a 24-page book for our Episode 1 special edition.  Stay tuned, as I will post samples as we finalize them.

A few weeks ago, Rich and I were in Charleston, WV, for a Shockacon event.  While there, we visited the nearby town of St. Albans and its neighborhood of “Jefferson.”  For those of you unfamiliar with Jefferson, let me educate you by sharing the following YouTube official news report…

Anyway, the whole experience gave me the inspiration to create a humorous erotica tale based in Jefferson and the initial plot has already been worked up.  I’ll be going full-bore on this one once Darkened Souls is complete and hope to twist Rich’s arm in the meantime to sell him on the idea of collaborating with me,  as his humor for the perverse is second to none.

That’s all I have for today.  Have a wonderful fall season and as the temperature drops, keep your stick on the ice!
Gary Lee Vincent